Picked up a set of intake boots in amazing condition, but they’re from a GL500, I thought these would fit my ‘82 500C but they look to be about an inch longer.


It’s hard to tell without bolting them in place but they definitely seem just slightly longer, my imagination or no? I’ve since looked and I think the GL500 part # is different but visually the ones I’ve seen are waaay longer but maybe that’s the 650 ones.

I have pods so technically I could bolt these up (need to order 2 o-rings too) and just have the pods further back, just need to move my battery a bit too though . 🤔

It’s possible the ones I have aren’t OEM either, not sure but I think so.

Any info or suggestions?

UPDATE: Confirmed they’re from a 78 CX500, but they are definitely a tiny bit longer than what’s on the bike now.

Well, looks like I’ll be putring a lovely set of GL500 boots up for sale in Canada. Have to eat the shipping on them but nothing ventured nothing gained I guess!

1982 CX500C (US)
Joined 5 mo ago
·
175 Posts
Checking with the seller now and they’re not off a GL but a 78 CX, I must have misunderstood.
Maybe the size is fine and they just look longer because they’re not in place at the right angle.

It’s also possible what’s on my bike now is not OEM, I can’t see the markings on the rubber as they’ve been shrink wrapped but they definitely are different than what I got that I know are OEM.

Given there’s some goop there we’ve previously discussed I’ll get some o-rings ordered up and see if they fit. I’m guessing the existing o-rings aren’t in good shape if the PO gooped the connections.

It should fit your C.

Are you comparing the right to the left in your photo? They are two different lengths side to side.

CXPHREAK said:
Standard CX, 500C and D all use the same intake boots. So these likely are GL.

As such you have a set that you can't use but are a valuable commodity to those that want them.

Depending on what you paid the mislisting may have netted you a bargain you can onsell.
Click to expand...

Seller seems pretty knowledgeable and claims they’re off a 78 CX500, and there was no GL in 78 right?

I measured them, they’re the same. 🤦‍♂️

It’s all about where you hold them I guess!

Unsta said:
Seller seems pretty knowledgeable and claims they’re off a 78 CX500, and there was no GL in 78 right?

I measured them, they’re the same. 🤦‍♂️

It’s all about where you hold them I guess!
Click to expand...

I had that wrong. Read my edit.

CXPHREAK said:
I had that wrong. Read my edit.
Click to expand...

Compared same side to same, but I lined them up wrong for the comparison. Too screw to bottom screw kind of thing.

Thanks guys, time to order o-rings!

I'll do the left one when my o-rings come in and replace both.

This looks like the path the air was trying to get through:

PO definitely tried filling it with something and shrink wrapping. As I mentioned I wasn't getting any RPM bumps from spraying carb cleaner anywhere, but the shrink wrap was definitely pulsing and I figured it was only a matter of time before that failed.

What I should have noticed was the M8 Allen bolt instead of the oem 6x22 bolt on the left side. I did notice it and ordered a replacement bolt but I want thinking “why would this be here”. Looks like PO stripped that one out and helicoiled it to a larger thread. Works though, just had the drill out the hole in the carb boot a little to accommodate the larger bolt. It lives here now.

Other thing I noticed is the o-rings are quite different, I ordered Honda oem and they are round and what was in there was much more flat. Honestly the old ones look like they’d seal better (if new) but I put the new OEM ones on.

If the mating surfaces are flat and un-marred the ring only has to be thick enough to protrude from the groove by about half a mm to seal well.

1982 CX500C (US)
Joined 5 mo ago
·
175 Posts
My eBay special ones just showed up. One is a few mm longer and the other a few mm shorter, didn't verify the angle on them but they looked ok. They'd probably bolt up ok with pods, but with one shorter and one longer might angle it a tiny bit. Definitely wouldn't use them with the stock airbox!

The kicker is the eBay listing is "In Canada" as the location (4-18 business days it claims, which is Canada Post regular post) but they definitely came from China, and the return procedure asks to send them back to China at my cost. 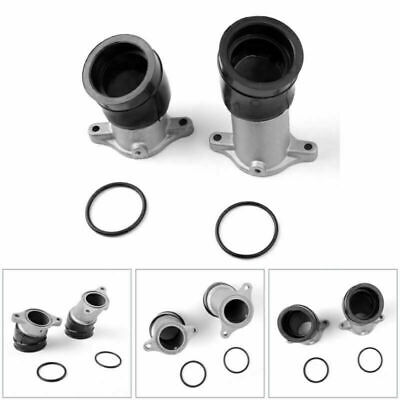